しまじろう(Shimajirou) is a beloved Japanese children's animation character.  Think of him as the Barnie (do kids these days even know who he is?) equivalent, but less menacing and more adorable.  The lil tiger helps you out with problem-solving-skill development, language acquisition and observing the world around you. He's using a string phone and where is the cup placed?  NOT AT HIS EAR.

What are we teaching little children nowadays?  To place a phone to your cheek, and listen carefully. Now take a look at Shimajirou's mom:

Clearly the creators of Shimajirou have some basic common knowledge to review.

My next favorite meme involves "FROZEN", or otherwise known in Japan as "Anna and the Snow Queen".

"Let it go" invaded the land of the rising sun with more ferocity than in the USA.  You don't believe me?  Near my aunt's house in Osaka, there's a dollar store that is open 18 hours a day, with "Let it go" on repeat.  18 hours of "Let it go".  That's not even that crazy.  Japanese people can't pronounce "Let it go", so it's just "Lelligooooo". 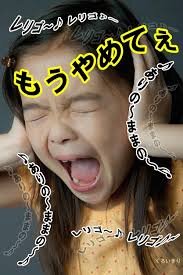 I felt the same way too, until this AMAZING THING SURFACED ON THE INTERNET: Look at that sumo wrestler, creating snow flakes from thin air.  You can almost hear him singing the song!  I couldn't handle this image when I first saw it.  It's spot on.  By the way, if you needed reference:

Last but not least, although not strictly Japanese (because they're not of Japanese origin.  Someone in America made it): Noisy isn't quite the right translation.  I think there's more of a wailing connotation, and kanji characters originate from traditional Chinese, so... THE END.  It's entirely possible that my humor isn't funny to anyone else, and it should be kept to myself.  That's fine.  If you have any thoughts on this, share it in the comments section.

Do you know any other Japanese memes that are funny?  Link them.