ONE PIECE is a beloved Japanese manga series that revolves around pirates.  It's in an unknown era, sort of like Full Metal Alchemist.  Somewhere in a universe where people have super human powers, there are pretty much magical scientific advancements, and everyone wants to be a pirate.  The premise is just so uplifting.  The characters are charismatic and dumb.  Friendship is real. And the food is awesome.

I recently stumbled upon this youtube video, originally taken from Nico Video, of this dude who recreated the ONE PIECE meat. 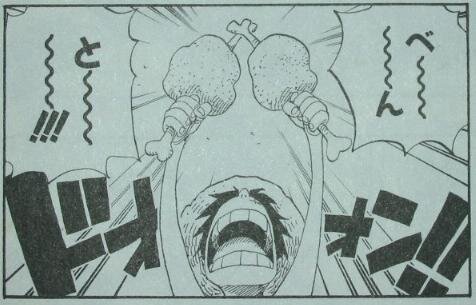 I'm really not sure what kind of living creature produces meat that looks like that, but this dude managed to make a real-life version of it out of a mixture of mystery meats.

Check it out below.

These are the reasons why I'm so amazed.  I'm more amazed watching this than watching the video of those bros who made the Turducken.

- They had to use paprika and yogurt (in meat?!)

- Who would eat that much meat in one sitting?  What kind of poop would you produce by the end of consumption?

I know that I'm usually pushing people to buy things from iTunes Japan, but THIS TIME I'm going to link you to the free webpage for ONE PIECE comics in color. The downside to this is that it's only up to volume 10 though.  You should make an iTunes Japan account, and check it out.

P.S. LOVE IS ALWAYS A HURRICANE.

Also, holy crap, ONE PIECE has been an ongoing series since 1997.  That's practically a lifetime.  17 years.